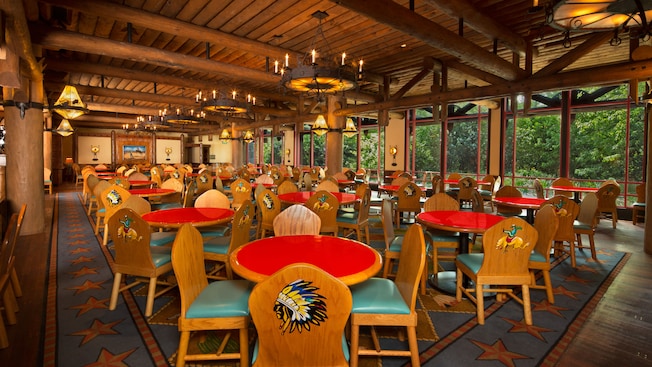 The Whispering Canyon Cafe is considered a hidden gem to many. The restaurant, located in the lobby of Wilderness Lodge, is known for its good food and, ironically, loud Cast member situations. For example, if you ask for some ketchup, they bring you all the ketchup bottles in the restaurant! Personally, it’s my favorite Resort restaurant due to the unique nature, much like 50’s Prime Time Cafe in Hollywood Studios.

However, this restaurant may soon lose the irony behind its name. A few folks have Tweeted at Disney in the past days. Disney has responded with a copy and paste reply, that goes like this: “Hi ____. We are continually updating our offerings throughout Walt Disney World Resort and are currently working on what’s next for Whispering Canyon. We apologize for any disappointments.” Disappointing it is indeed.

However, over on the Walt Disney World website, the description for Whispering Canyon remains the same, citing “wise-cracking staff” and even a nod to the ketchup scenario it’s famous for.

So, what do you think? The end of humiliating and fun scenarios and the consumption of BBQ in peace? Or is nothing happening? Don’t shoot the messenger, partner.

UPDATE: Disney has responded to another Tweet, this time clarifying that Cast Members will simply be lowering their voices courtesy to guests staying in the nearby rooms. This could be considered good news, mainly because we will still get the regular antics, just quieted down a tad.