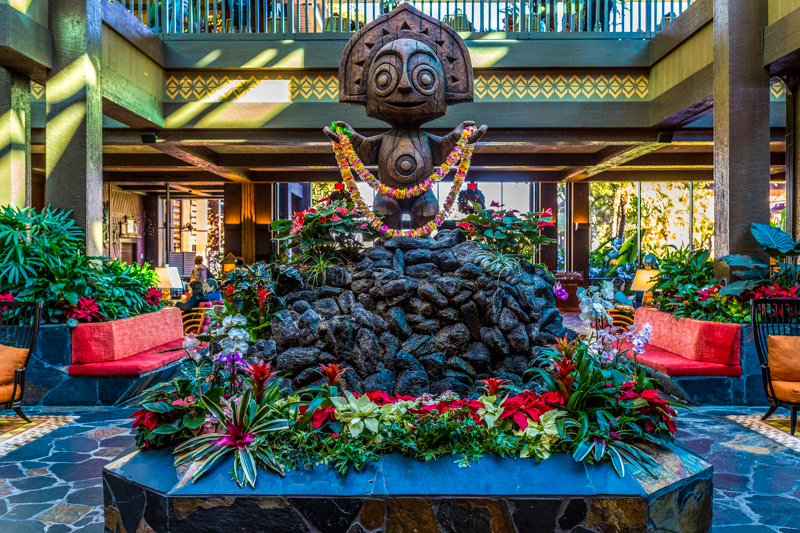 If you enjoy wearing Hawaiian shirts, being adorned with flower leis, tiki torches, fire grilled food, and Dole Whips, then let the music of Disney’s Polynesian Village Resort transport your mind to your home away from home! The D-COT Jukebox has included the complete loop from the Polynesian Resort since March 15, 2017, but the resort itself has been a cherished part of Walt Disney World since its grand opening on October 1, 1971! In fact, the Polynesian Village Resort and the Contemporary Resort are the only original onsite hotels at Walt Disney World (this excludes the Fort Wilderness campground which also opened at that time).

The music loop for the Polynesian is just over three hours long, making it the longest music track on the Jukebox by far! In the very short time it has been a part of the Jukebox, D-COT members have listened to the loop at least 2,448 times. It’s no wonder why a resort like the Polynesian would need a loop so long with such a high play count. The atmosphere of the Polynesian fits what many consider to be the ideal vacation and there is a lot to enjoy there: a pool by a “volcano”, the Spirit of Aloha dinner show, Kona Café with its signature Tonga Toast breakfast, Dole Whips, sushi, ‘Ohana (meaning family) with all-you-care-to-eat oak fire grilled meats, Trader Sam’s fantastically themed tiki bar, Bou-tiki shopping, and Magic Kingdom’s fireworks from across the lagoon.

Since 1971, Disney has added another 17 resort hotels to the Walt Disney World property with plans to add more. But ask D-COT members which Disney resorts they like most and a large number of them will have the Polynesian on their list, whether they’ve stayed there or have just visted for one reason or another. The track is on 68 favorite playlists among members, and 45 custom playlists among supporters. It gets an average rating of 4.9/5 with 52 votes. Clearly the music of the Polynesian Village Resort is a great addition to the D-COT Jukebox ‘ohana and may one day find itself on the Top 25 playlists. Until next week, aloha!