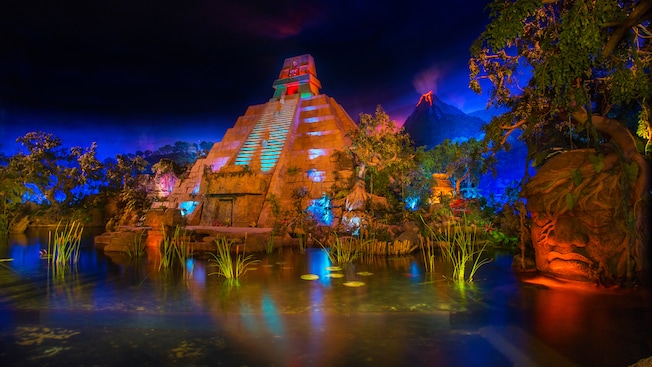 In the spirit of Cinco de Mayo, let’s take a trip back in time (in more ways than uno)! When it comes to the D-COT jukebox, this track even pre-dates our last feature by about two months. The sounds of El Rio del Tiempo were added on June 28, 2008. Some of us remember this ride at Epcot’s Mexico pavilion which debuted with the grand opening of Epcot on October 1, 1982 as the only ride on the entire World Showcase. Maelstrom, the second World Showcase ride did not debut until nearly six years later. El Rio del Tiempo closed on January 2, 2007 to be transformed into what we now know as the Gran Fiesta Tour starring the Three Caballeros.

El Rio del Tiempo, translated into English, literally means “The River of Time.” Before 2007, when people got into the boat at the Mexico pavilion, they were taken on a river tour starting in Mexico’s ancient days by a pyramid and an active volcano under a night sky. From there they drifted through the centuries to the more modern times of the 1980s. Most of us are familiar with the Disney Parks tradition of attractions exiting into gift shops, but on this ride the designers figured, “why wait?” As you entered modern Mexico, two people attempted to sell their spread of souvenirs to passers-by from park open to park close! Of course, they were projected on a screen and the souvenirs on the ride were not for sale, but you probably could acquire a reasonable facsimile of what you wanted elsewhere in the pavilion. The ride closed with a fiesta under the night sky complete with fiber-optic fireworks and dancing Audio-Animatronics©.

Today, if you ride the Gran Fiesta Tour, it isn’t difficult to imagine what it used to be. The set pieces are mostly the same with primarily the video projections and audio being altered for the new theme. If the Audio-Animatronics©, which are still there as well, remind you of the ones used in “it’s a small world,” that is because they were designed by Disney Legend, Mary Blair.

Our jukebox track has popularity with a smaller group of our members who still remember it with fondness. It has been played over 13,000 times and holds an average rating of 4.7/5 with over 80 votes. Over 160 of our members have added it to their favorites and it has been added to custom playlists 24 times. For those who remember the ride and those who don’t, but always wondered about this track, give it a listen. ¡Feliz Cinco de Mayo!