The answer might surprise you! March was Women’s History month so please forgive my tardiness. Harriet Burns was Walt’s first female Imagineer in 1955! In a male dominated field and time, Harriet Burns shined and Walt, with the Midas Touch of talent, was impressed by what Harriet brought to the table. 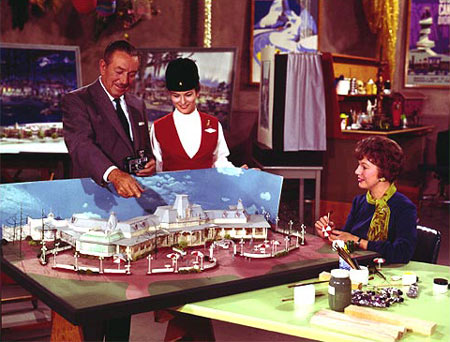 Harriet was known for her feminine style, but would wear work gloves, cowboy boots in the shop, and would always bring a pair or trousers in case she had to do ladder work. Harriet’s numerous skills included painting, work bench tools, enamels and even torching.

Everyone knows the floating head in the HM is Leota Toombs Thomas, but did you know, Harriet was the first model? Walt felt her features were too delicate.

Harriet spent many hours in the model shop and worked with many media’s with little difficulty. Harriet was also featured with several cameos on the Wonderful World of Color, i.e. Disneyland’s 10th Anniversary (now on YouTube), which brought us Disney Legend Julie Reihm – Cassaleto as well. Here you see both Harriet and Julie with Walt showing us the new Plaza Inn Restaurant.

Working in a time where females in a shop was absolutely unheard of, Harriet’s bold style and incredible talent impressed Walt. Harriet worked on the Mickey Mouse Club, Sleeping Beauty Castle, New Orleans Square, the Haunted Mansion, Storybook Land, Great Moments with Mr. Lincoln, the Carousel of Progress and designed all of the “singing birds” in the Enchanted Tiki Room, the first Audio-Animatronics® attraction at Disneyland.

Harriet’s style will live on forever, and is seen every day, enjoyed by millions of park goers every year. Harriet passed away in June of 2008. Honored as a Disney Legend, she will forever hold the one honor, no other legend can hold. The first Woman Imagineer.