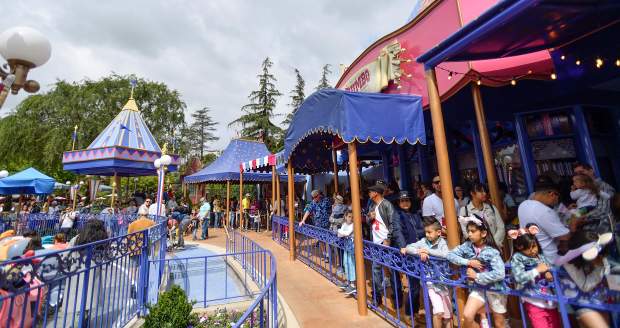 The shady respite from the California sun allows those waiting to ride the plucky pachyderm led by Timothy the Mouse. With waits up to an hour for this classic feature, the shade will be greatly appreciated and give a cool respite for those anxiously awaiting flight. This queue resembles a bit of the Fantasyland makeover at WDW several years back.

The ride is based on the Movie released in 1941 and is one of the original rides in the Disneyland Park. The rides original design was for the ears to wiggle, but the Imagineers could not get that to work by opening day, maybe that one is still on the back burner. The ride was late from the Parks original kick off, but made it in about 30 days later. History tells us President Truman passed on riding Disney’s plump pachyderm because the elephant was the symbol of the Republican party. All I can say is, Mr. President, sir, you surely missed out.

Approximately 90 million people have ridden with Dumbo while being inspired by Timothy, and even an original Dumbo Carriage was donated to the Smithsonian Museum. Dumbo is just one of those rides people immediately picture when you mention the Disney Parks. The rides circular path and elevation gives one a great view of the rides and stories of Fantasyland yet to be visited or have been visited in the day. So pack up some peanuts, and head to the canopy, your trust steed awaits!