Don Cheadle has been announced he will voice Donald Duck in the Duck Tales Finale this season. The Episode Shadow War will air August 18th. Other cameos are happening for the Duck Tales series Don Karnage (Tale Spin), Lin-Manuel Miranda (Moana), Kimiko Glenn (Orange is the New Black), Catherine Tate (Dr. Who), and others.

Cheadle: “It’s an awesome opportunity because there are only so many roles that you look forward to playing as an actor. You’ve got to do your homework and bring your A-game when you’re trying to voice Donald Duck.”

For those of you who are trying to recollect who Don Cheadle is, he has played War Machine from Iron Man 2 throughout the Infinity War story arc and was in House of Lies.

Many people have voiced Donald since his first appearance in The Wise Little Hen, a Silly Symphony. Donald’s dancing abilities were prolific! But planning ahead, not so much. 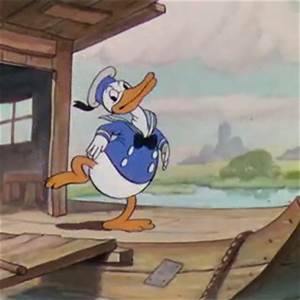 Clarence Nash, also known as Ducky Nash, was the first to voice Donald (he also voiced Daisy too). Named a Disney Legend posthumously in 1993, the mantle of arguably the most recognized animated character voice was passed to many others. Except for that one episode, Donald’s Dream Voice, where Leslie Denison took over for the voice after Donald took some magic pills to be better understood. One of the most asked trivia questions of Chief Archivist Emeritus Dave Smith. Other voices were Jim Tadevic, Sam Kwasman, Daniel Ross and Tony Anselmo (the current voice).

Our prodigious duck has more then one birthday! Either March 13th, which is why the license plate of his car is 313, or June 9th. Many consider Donald 84 years old, which is based on his first appearance in film. However, there is some information dating him back to 1914. It is a topic of contention among many duck connoisseurs.

Donald’s animated look has changed over they years, but no matter the change, our pantless Anthropomorphic Anatidae has warmed our hearts and given us many hours of laughs. Whether you are Team 313 BDay, or Team 609 BDay, Donald’s bad luck, temper, and his love for Daisy has entertained generations of Disney fans and will continue to do so for many years to come.