Magic Behind the Music: Epcot – American Adventure Pavilion – Voices of Liberty – Battle Hymn of the Republic 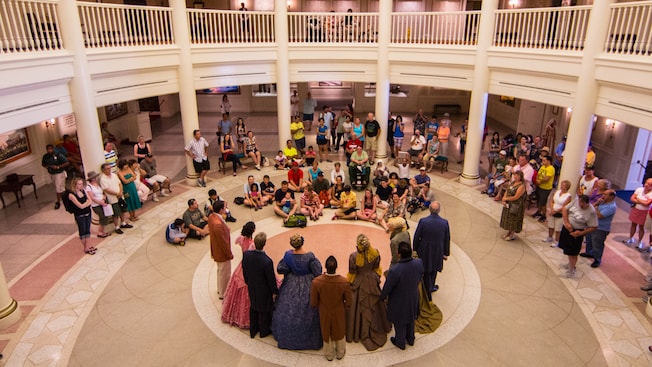 In our Magic Behind the Music series, I have previously covered The American Adventure show at Epcot’s American Adventure pavilion. But before that half-hour show, there is another presentation as guests gather in the rotunda of the pavilion. The Voices of Liberty are an a capella group that performs a series of American patriotic songs throughout the day.

They still do performances outside of Walt Disney World, but over the years, members have come and gone. The audition process is a difficult one in that they might see 200 auditioners a day when casting. An auditioner not only needs to sing well, but needs to blend well with the other vocalists, so a stellar soprano or a terrific tenor could audition, but be turned away because they just don’t have the right tones in their voices.

The D-COT Jukebox has a selection of 16 songs by the Voices of Liberty. The track for the Battle Hymn of the Republic was added on March 1, 2009. It has a play count of 7840. It is a favorite of 104 Members and is on 16 Custom playlists made by D-COT Supporters. This track has a strong 4.7/5 average rating with 49 votes.

In honor of America’s veterans (who’s national holiday we recently celebrated on November 11), I have selected this track as the feature. The song was written by Julia Ward Howe in November 1861 during the turbulence of the American Civil War. A strong advocate of the Union and an active leader in anti-slavery politics, Howe’s lyrics intended to make a connection between God’s judgment and the raging war. Since then the song has become one of the USA’s more popular patriotic hymns. It was a favorite of Walt Disney himself and was played at the conclusion of his private funeral on December 16, 1966.

American Adventure, epcot, magic behind the music, voices of liberty