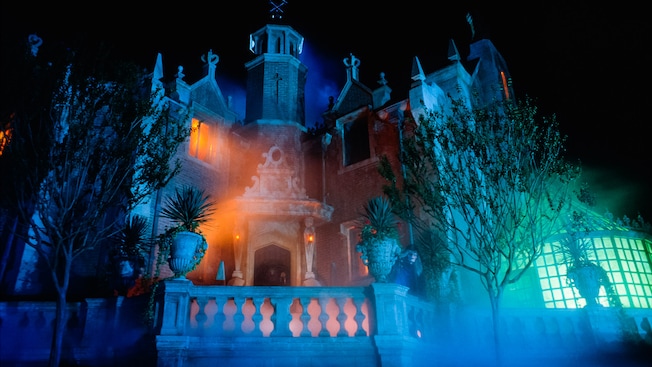 Welcome, foolish mortal, to the Haunted Mansion! The sounds of this classic and creepily fun version of the attraction at the Magic Kingdom have been haunting the D-COT Jukebox since March 31, 2017. The attraction itself has enjoyed a much longer afterlife. Original designs for it were laid out to entertain passers by near the Walt Disney Studios before Disneyland and even WED Enterprises were developed and Walt had just hired his first Imagineers.

The plans eventually crawled out of the grave again as Disneyland was gaining in popularity. Two Imagineers, Rolly Crump and Yale Gracey were assigned to the project. They embraced it with unparalleled enthusiasm as they took to working with ghostly special effects at the Studios. They would leave some of their happy haunts running overnight and the cleaning crew didn’t appreciate it. The cleaners left a note with a request that Crump and Gracey leave the lights on in the future. Crump and Gracey obliged, but rigged sensors that tripped the lights off and materialized the disembodies ghosts when the cleaning crew entered the room! Crump and Gracey returned the next day to a cleaner’s broom, apparently dropped hastily on the floor, and a message simply stating that the cleaning crew would not be returning to clean that room again.

The project and attraction opening for Disneyland’s Haunted Mansion experienced frequent delays throughout the 1960’s as it was difficult to satisfy Walt with putting a run-down manor in his otherwise lively and beautiful theme park. Then, major labor went into designing attractions for the World’s Fair. The last delay came with Walt’s unfortunate passing away in 1966.  In 1969, final arrangements were made for the attraction to open to the public at Disneyland.  It gained great popularity so a copy, with a different exterior, creeked open its doors with the grand opening of Walt Disney World on October 1, 1971.  Guests have been traveling through the ghostly retreat on their Doom Buggies ever since, led by their Ghost Host, voiced by the late Paul Frees. Paul Frees also is known for giving a voice to Ludwig Von Drake if you can believe that. His likeness is in one of the portraits of the stretching room, along with Thurl Ravenscroft who is the bass vocal of the Grim Grinning Ghosts quartet (also bearing his likeness) and is also known for his song, “You’re a Mean One, Mr. Grinch”.

Our D-COT track has an ever-growing playcount of 3,849, but there’s room for 4,000. Any volunteers?  With a weekly playcount of 19, it can often be found on the Top 25 Played Week playlist. 121 D-COT members have this track as a favorite with D-COT Supporters having it on 57 custom playlists. The Haunted Mansion boasts of wall-to-wall creeps and hot and cold running chills, so it’s no mystery it is a 5-star establishment.  It has a 5.0/5 average rating with 67 votes.

Halloween is the perfect time of year to enjoy this…lively…experience so hurry baaaack and be sure to bring your death certificate.