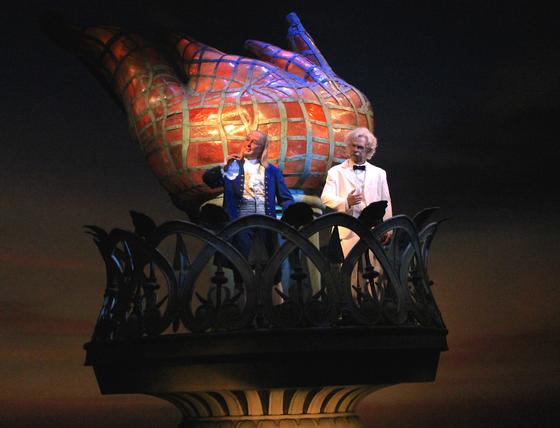 Independence Day is coming up in the United States and soon we’ll be celebrating the 242nd birthday of the nation with all the fireworks we can muster! Walt Disney World sets off an extra impressive display of fireworks on the 4th of July at the Magic Kingdom too, with shells bursting in a panoramic fashion on all sides of the park! But one of the truly great things about Walt Disney World is that it celebrates the USA year-round with a few different attractions and one of them is the American Adventure in Epcot. Prominently placed in the middle of the World Showcase sits a large building fashioned after American Colonial architecture, housing an auditorium where guests view the half-hour tour through the history of the United States.

The audio for the show is one of the earlier additions to the D-COT Jukebox. It was added on February 5, 2009. D-COT members have listened to the track over 16,850 times. Similarly, the show itself was one Epcot’s original attractions, opening with the park on October 1, 1982. With the show seating up to 1,024 guests per show, and with several show times per day, imagine how many people have seen it! Through a combination of video projections, props, and Audio-Animatronics©, hosts Benjamin Franklin and Mark Twain give an overview of US history from the first settlers to the present. In telling the story, the hosts highlight parts of history that show some of America’s greatest achievements, and also some of America’s greatest shortcomings. This makes for a unique type of attraction at Walt Disney World, and not the only one of its kind – one that is both entertaining and educational. In all of its operational history, Disney has kept it true to form only giving it a technology overhaul and theme song update in 1993 and an addition of more recent events to the ending montage in 2007.

The attraction is a great sight to behold, but the audio is a great asset to the Jukebox as well since that is where the story is found most of all. D-COT members have enjoyed it so much that 182 have added it to their favorites and supporters have added it to 20 custom playlists. It gets a rating of 4.8/5 with 68 votes. This is a great time of year to give the track a listen. Happy Independence Day! Keep dreaming your golden dreams, and may the American Adventure continue for a long, long time!