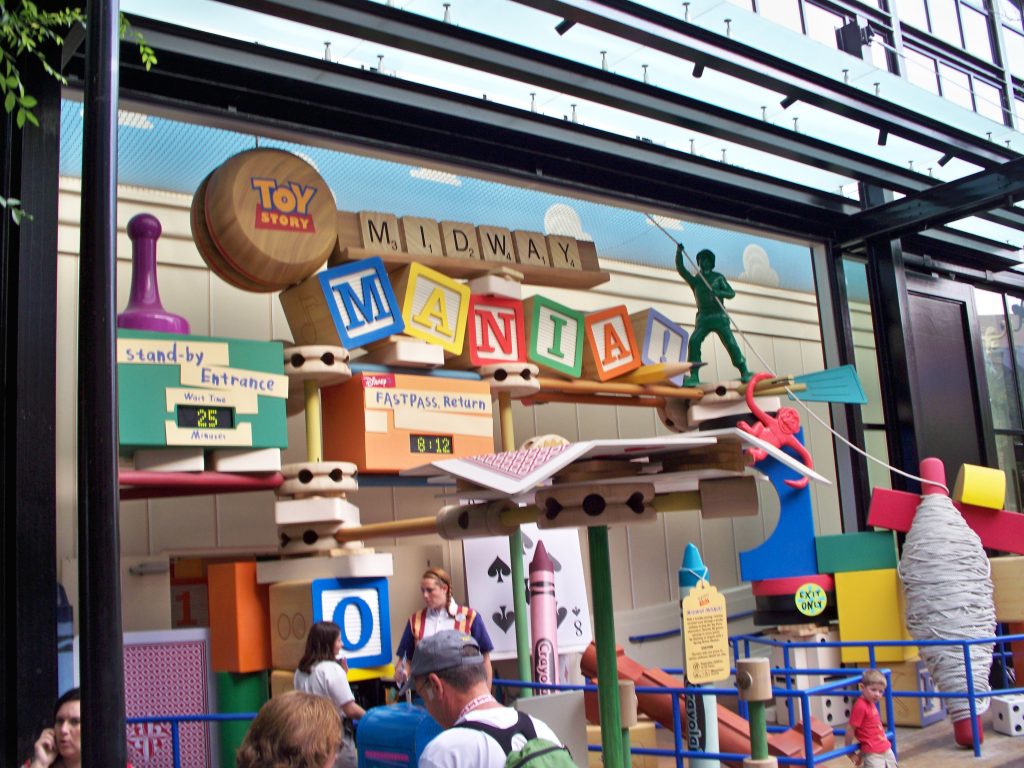 Come on folks! Step right up and enjoy the ride audio for Toy Story Midway Mania! This track, added to the D-COT Jukebox on April 10, 2012 has given listeners the opportunity to re-live the sounds of one of Disney’s most popular attractions over 5,300 times! Over 120 D-COT members have added it to their favorites and supporters have added it to 20 custom playlists.

Toy Story Midway Mania first opened at Disney’s Hollywood Studios in Florida in May 2008 with copies of the attraction opening in Disney’s California Adventure in June 2008 and Tokyo Disney Sea in July 2012. Walt Disney Imagineering set out to create an immersive combination of ride and game experience themed to Disney-Pixar’s Toy Story films. They also used a game style reminiscent of the carnival booth games of yesteryear. Guests hop in a car armed with pull-string toy cannons and donning 3-D glasses. The ride whirls them quickly around sharp turns to face a series of mini-games on screens. This attraction was no small feat from a technology standpoint. It uses state-of-the-art tracking devices so that if a ride vehicle doesn’t stop on an exact spot, the game system will compensate. This becomes most apparent in the last mini-game when the ride vehicle moves along slowly as guests continue to fire at targets. The characters of Toy Story set up the targets and players shoot 3-D virtual ammunition that appears to emerge directly from the pull-string cannons and sail toward wherever the cannon is aimed. The ammunition and targets vary game to game with pies for practice, baseballs for plates, darts for balloons, as well as a ring toss game and a suction cup dart game. Guests also score points and compete against one another for the highest score. The D-COT track gets a high score of its own with a rating of 4.6/5 among 41 votes!

Needless to say, Toy Story Midway Mania became an instant hit with theme park guests, many of whom wait for hours to ride on a daily basis. In fact the ride became so popular that people decided it was too good for just one ride per visit. Many guests have been known to FastPass the attraction and go straight to the stand-by line at park open to try it twice! This is soon to change, however, with the expansion of Toy Story Land opening in just a few days. That will bring with it the addition of two new attractions, Slinky Dog Dash and Alien Swirling Saucers, which are sure to add a barrel of monkey wrenches to a lot of touring plans. Fortunately, for those of us on D-COT, we don’t need to try our luck with long lines to re-live the audio of one of our favorite attractions. Just spin around to it and take aim at the play button!