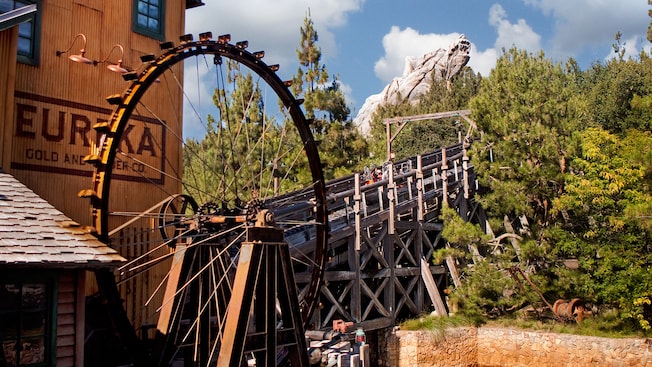 Let your mind float off to a river in the grandeur of the California wilderness as you listen to the California mountain music of Grizzly River Run!  The music of the Grizzly River Run area at Disney’s California Adventure theme park has been a part of the D-COT Jukebox since October 16, 2017. In less than a year it has received a total playcount of 1,313 with a weekly playcount of 12.  Clearly this track has found a comfortable den with us, even those of us who may have never ventured out to the Disneyland Resort, as the music is so easy on the ears with a little bounce to it in its own country way.

Grizzly River Run has been a part of Disney’s California Adventure at the Disneyland Resort since the park opened on February 8, 2001 and the picturesque Grizzly Peak is a well-known park icon. For those unfamiliar with the attraction, it is a river rapids ride much like Kali River Rapids at Disney’s Animal Kingdom, and like Kali River Rapids guests will get pretty wet! The unique elements of Grizzly River Run are its theme and the fact that the circular ride rafts continue to spin as they make the final drop.

An interesting challenge was presented to the Imagineers involved in the design process for the attraction in that any water raft ride must have a water reservoir that can hold all the water that would normally pump through the upper portions of the ride when the attraction is shut down. Unlike at Walt Disney World, space is at a premium in Disneyland. The Imagineers figured the real bear of the project was going to be spending a lot of extra money to put the reservoir underground. Fortunately, upon looking at the layout for California Adventure, they found that the Pacific Warf area already had a reservoir to simulate a tidal effect. So Imagineers just made it a water reservoir that would serve two purposes: the tidal effect for Pacific Warf and the basin for Grizzly River Run.

The music of Grizzly River Run has become a favorite of 30 D-COT members as well as being added to 30 Supporter playlists. It has a 4.7/5 average rating with 30 votes. If you’re seeing a pattern in these stats, it may or may not be a conincidence. Thanks to the D-COT Jukebox, east coast folks don’t have to make the trip out to California to let their minds be transported there. The music of Grizzly River Run is always just around the river bend!