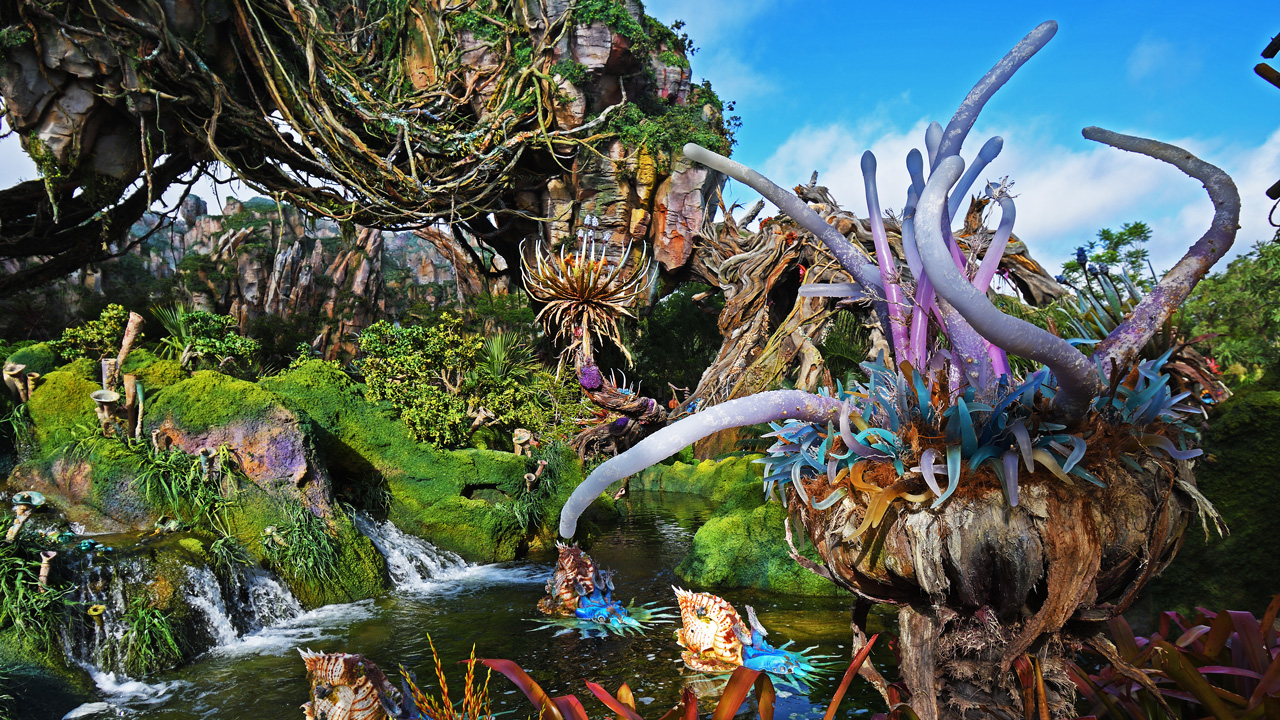 The wonder, adventure, and unfamiliar beauty of the world of the Avatar (2009) film franchise come to your ears as you listen to the area music loop for Pandora at Disney’s Animal Kingdom.  A large number of us Disney fans remember when the Animal Kingdom opened in 1998 with a variety of themed lands. One of them was Camp Minnie-Mickey where character greetings abounded and a great many traveler would venture in just to see the Festival of the Lion King. In the original vision for Disney’s Animal Kingdom, imagineers wanted to place a “Beastly” land in the park, featuring mythical creatures like dragons, that would have likely ended up taking over Camp Minnie-Mickey. In 2011, those plans changed. In fact on September 17, 2011, Disney struck a deal with Fox and James Cameron to build this land based on Cameron’s film and on January 5, 2014, all future trips to Camp Minnie-Mickey were terminated to make way for construction.

Pandora was a long time in the Imagineering as it finally opened on May 27, 2017. Our D-COT track was added to the jukebox just months later on November 21, 2017. James Cameron was an official consultant in the development process and for anyone who has seen Pandora in person and viewed the Avatar film, that is plainly apparent. Guests enter the land via a bridge from Discovery Island and Imagineers made sure that entry would be like a peeling back of the curtain as you begin to see the scenery change into something more alien and then you find yourself standing before the titanic floating mountains!  Disney truly outdid themselves in the attention to detail and, as in the film, Pandora is a place that visitors must see during the day and again at night for a different spectacle.

The land opened with two attractions and a quick-service restaurant. The restaurant, Satu’li Canteen provides a unique menu that many guests seem to enjoy. The Na’vi River Journey attraction takes guests on a nighttime boat ride through Pandora. The Flight of Passage attraction takes guests on a 4-D plunge into an abyss of adventure on the back of a banshee and is aptly described as a version of Soarin’ on steroids!

Disney fans may have mixed opinions about the Avatar film, but those who have visited Pandora thus far largely agree that it is nothing short of amazing. D-COT members in particular have listened to this track on our Jukebox over 3,100 times in less than a year! It has a weekly playcount of 71.  It is a favorite of 81 members and D-COT Supporters have added it to 57 custom playlists. As a testament to the wonder of the land and how the music immerses guest into it, our Jukebox track gets a 5.0/5 average rating with 65 votes!

As you enjoy giving this track a listen for the first time…or the fiftieth, let yourself be immersed again in the wonder of Pandora!